The purpose of this award is to recognize the awardees for their excellent work in writing a research paper for their HIST 302W; this is a research seminar that every history major must take, and in which many non-history majors also enroll.

Alyssa is a current junior and is pursuing double majors in History and Political Science. Alyssa was nominated for this award by Dr. Prakash Kumar. The title of her research paper is “Gandhi and Women in the 1930s: Origins of Nationalism and Women’s Role.” Upon her graduation next December, Alyssa is interested in attending grad school to earn a master’s degree in history.

Casey is a graduating senior and is pursuing double majors in History and Classics and Ancient Mediterranean Studies. Casey was nominated for this award by Dr. Eliyana Adler. The title of Casey’s paper is “Completing the Arch: Recontextualizing the Arch of Titus.” Casey is currently completing his senior honors thesis through the Department of Classics and Mediterranean Studies.

Mae is a current junior and is pursuing double majors in History and Political Science. Mae was nominated for this award by Dr. Prakash Kumar. The title of Mae’s research paper is “Gandhian Nonviolence: Martin Luther King Jr. and Civil Rights.” Upon graduation in another year, Mae intends to pursue a master’s degree that will allow her to join an intelligence agency within the U.S. government.

Katerina is a current junior and is pursuing double majors in History and Political Science. Alyssa was nominated for this award by Dr. Kathryn Merkel-Hess. The title of Katerina’s research paper is “Killing to ‘Save,’” a topic with reference to Nazi murder of people with mental and physical disabilities. After she graduates in another year, Katerina is considering programs in graduate school that will best combine her interests in political science and history.

The purpose of this award is to recognize the awardees for the excellent research undertaken for their senior honors thesis. We have 9 students who are completing their theses in history this year, three of whom are receiving this award.

Samantha is pursuing triple majors in History, French and Francophone Studies, and Classics and Ancient Mediterranean Studies, with minors in Latin and Ancient Greek. Sam is completing her senior honors thesis under the direction of Dr. Mathias Hanses. The title of her thesis is “The Power of the Sun God—Apollo Throughout the Ages.” Her expansive thesis compares the use of the god Apollo and his imagery in the reigns of Emperor Nero and King Louis XIV of France. Focusing especially on performance, literature, and architecture and the built environment, Sam reveals how each leader asserted their authority by linking themselves to Apollo and his power. Sam was also chosen as the spring 2021 French and Francophone Studies major student marshal.

Ellie is pursuing triple majors in History, Economics, and French and Francophone Studies, along with a minor in Jewish Studies. Ellie is completing her senior honors thesis under the direction of Dr. Tobias Brinkmann. The title of her thesis is “Conflicting Identities: Algerian Jewish Migration to France as a Result of the Algerian War, 1954–1962.” This well-written thesis provides extensive historical background and a discussion of the emancipation of Algerian Jews in the 1870s and the challenges that Algerian Jews faced during the early 1940s after the Vichy regime revoked the French citizenship of local Jews and imposed measures to isolate Jews, measures that were even harsher than the regime had imposed in France itself. The questions this honors thesis project raises transcend Jewish and French history in a narrow sense and remain highly relevant.

Parker is pursuing double majors in History and Political Science. Parker is completing his senior honors thesis under the direction of Dr. Gary Cross. The title of his thesis is “From Exploitation to Recreation: Industry, Outdoor Culture, and Conservation in the Upper Delaware River Region.” Parker’s closely researched study of the transformation of the Upper Delaware River area of eastern Pennsylvania in the late nineteenth and twentieth centuries is a fine example of exploring an important historical trend that occurred in the United States in this period—that is the transition of a region from a zone of industrial extraction to a modern region of commercial and organized recreation. Parker uses a variety of local histories and memoirs as well as a wide range of primary sources—including maps and government reports—offering an exceptional range of sources and historical perspectives.

This is the inaugural year for this award, and offers the department the opportunity to honor both
a student and our colleague, Dr. Annie Rose, who led this chapter of Phi Alpha Theta for many years.

Grey is a current junior and is pursuing triple majors in Psychology, Sociology, and History. Grey will be presenting their paper at the Phi Alpha Theta ceremony this year. The title of the paper is “The Fourth Philosophy, the Sicarii, and the Zealots: Revolutionary Villains in The Jewish War,” which Grey wrote this past fall for a course on the Roman Empire, which was taught by Dr. Christopher Lawrence. Upon graduation in another year, Grey intends to pursue a doctoral degree in sociology.

The purpose of this scholarship is to recognize a student with an outstanding academic record, who is also pursuing a minor in Middle Eastern Studies.

Charlie is a current junior and is pursuing a double major in History and International Politics, as well as minors in Middle East Studies and Global Security Studies. At the moment, Charlie intends to combine his various interests with an orientation toward foreign policy—either in politics or working for the U.S. Department of State (or another similar agency).

Luisina is a current sophomore and is pursuing a major in International Politics, along with minors in Middle East Studies, Arabic, Latin American Studies, and Spanish. Because of her work as an undergraduate research assistant in the Children, Media, and Conflict Zones Lab in the Donald P. Bellisario College of Communications, Luisina has planned that upon graduation in two years, she would like to pursue a master’s degree that will combine several of her current academic interests.

John Taylor Scholarship in the Department of History

This award is given to provide recognition and financial assistance to outstanding undergraduate students enrolled or planning to enroll in the College of the Liberal Arts. This award is primarily dedicated to students who have demonstrated an interest in medieval history, and who are either a major in Medieval Studies, or who have shown a strong interest in Medieval Studies. John Taylor is an ’87 History graduate and is president and principal of compliance and regulatory affairs if possible with Greenleaf Health in Washington, DC. John holds his juris doctorate from William & Mary Law School and prior to his position at Greenleaf, he was acting deputy commissioner for global operations and policy with the FDA. a focus on ancient and medieval history.

Jordyn is a current junior and is pursuing triple majors in History, Classics and Ancient Mediterranean Studies, and Art History. Although Jordyn has a particular love of Rome from its ancient history through the Renaissance and she was fortunate to participate in Penn State’s study abroad program in Rome several summers ago, she nonetheless retains a desire to study all periods of history. Her most recent major in Art History indicates that she is keen to understand the physical world of human history.

Corey is a current sophomore with junior standing. He is pursuing double majors in History and Classics and Ancient Mediterranean Studies and has just added a third major in Political Science. Corey is particularly interested in human political environments and is currently focused on the question of what elements of human society produce political decision makers. He is interested in the question across time, whether such decision makers were formed in the ancient, medieval, or modern worlds.

This award is given to honor and recognize an outstanding undergraduate woman, who has combined a major in history WITH outstanding and remarkable service to humanity. Margaret Bixler Kolpak was a ’64 Arts and Letters graduate who passed away in 1991. Her parents, Dr. Andrew Bixler, ’33 ENG, and Ella Bixler, created this fund in Margaret’s memory along with their family members and friends.

In 2018, Jenna graduated for the first time from Penn State, having pursued her degree with an International Politics major and a minor in History through Penn State World Campus. Jenna then continued her studies through World Campus and this spring is a graduating senior with double majors in History and African Studies. Jenna has complemented her academic successes with extensive service and internships. She is currently a research, analysis, and learning intern with the International Rescue Committee. In particular, she is working with the subgroup involved in developing tools to combat labor trafficking. Secondly, upon graduation and before she returns to pursue graduate studies, Jenna will be a City Year AmeriCorps member in Columbus, Ohio, for the 2021–22 school year. Jenna’s record at Penn State is a remarkable one of academic excellence and active service in an effort to make many communities better for all humans. Jenna has also been chosen as the spring 2021 African Studies major student marshal. 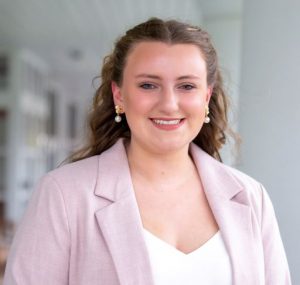 Ellie has been chosen as the History major marshal in recognition of her platinum-level academic performance at Penn State, as well as her extensive service to local, state, and global communities. In her years here, Ellie has received many awards, and she has studied abroad in both London and Montpellier, France. In January 2019, she also participated in a Penn State “Fact Finders” trip to Israel and Palestine, during which the Penn State students visited historical sites in both Israel and Palestine, met with local officials and leaders of organizations, and had wide-ranging discussions about the historical and continuing Israeli–Palestinian conflict. While at Penn State, Ellie has also held two History internships, one as an intern at Harpers Ferry National Historical Park in West Virginia and a second as an intern for the Office of the Historian at the United States Department of State. And Ellie is just beginning. She intends to continue her combined interests of academics, service, and global awareness—she is currently awaiting her placement next year either through Teach for America (where she would be teaching high school math in Charlotte, North Carolina) or through France’s equivalent service, known as TAPIF, which is a teaching assistant program in France. Her service through either Teach for America or TAPIF will help her decide on her future studies, which will include either graduate school or law school.