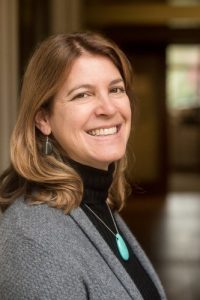 Cathleen D. Cahill is an associate professor of History at Penn State University. She is a social historian who explores the everyday experiences of ordinary people, primarily women. She focuses on women’s working and political lives, asking how identities such as race, nationality, class, and age have shaped them. She is also interested in the connections generated by women’s movements for work, play, and politics, and how mapping those movements reveal women in surprising and unexpected places. Her first book, Federal Fathers and Mothers: A Social History of the United States Indian Service, 1869–1932 (University of North Carolina Press, 2011), won the Labriola Center American Indian National Book Award and was a finalist for the David J. Weber and Bill Clements Book Prize.

Her most recent book is Recasting the Vote: How Women of Color Transformed the Suffrage Movement (University of North Carolina Press, 2020). Following the lead of feminist scholars of color it calls for alternative “genealogies of feminism.” It is a collective biography of six suffragists–Yankton Dakota Sioux author and activist Gertrude Bonnin (Zitkala-Ša); Wisconsin Oneida writer Laura Cornelius Kellogg; Turtle Mountain Chippewa and French lawyer Marie Bottineau Baldwin; African American poet and clubwoman Carrie Williams Clifford; Mabel Ping Hau Lee, the first Chinese woman in the United States to earn her PhD ; and New Mexican Hispana politician and writer Nina Otero Warren–both before and after the ratification of the Nineteenth Amendment.

A volume she co-edited with Kent Blansett and Andrew Needham, Indian Cities: Histories of Indigenous Urbanization, was just published with the University of Oklahoma Press (2022).

Her next project, Indians on the Road: Gender, Race, and Regional Identity reimagines the West Coast through the lens of Indigenous people’s relationships with the transportation systems that bisected their lands, forming corridors of conquest and environmental change while simultaneously connecting them in new and sometimes empowering ways to other people and places.

She also serves as steering committee chair for the Coalition for Western Women’s History and is a member of the editorial boards for the Journal of the Gilded Age & Progressive Era and the University of North Carolina Press’ Gender and American Culture Series.

Recasting the Vote: How Women of Color Transformed the Suffrage Movement (University of North Carolina Press, 2020)

“Our sisters in China are free”: Visual representations of Chinese and Chinese American suffragists. Journal of the Gilded Age and Progressive Era, 19:4  (Autumn 2020), 634-641

“‘An Old and Faithful Employee’: Obligation, Social Provision, and Federal Retirement Pensions in the U.S. Indian Service” The Journal of the Gilded Age and Progressive Era (October 2015) Vol. 14 Issue 4

“‘An Indian Teacher Among Indians’: Native Women as Federal Employees,” in Indigenous Women and Work: From Labor to Activism, ed. Carol Williams (University of Illinois Press, 2012)

“Seeking the Incalculable Benefit of a Faithful, Patient Man and Wife: Families in the Federal Indian Service” in On the Borders of Love and Power: Families and Kinship in the American West Ed David Adams and Crista DeLuzio (University of California Press, 2012)

“‘You think it strange that I can love an Indian’: Native Men, White Women, and Marriage in the Indian Service,” in Cathleen D. Cahill, Susan Gray, Jacki Thompson Rand and Kerry Wynn, eds., “Intermarriage in American Indian History: Explorations in Power and Intimacy in North America” Frontiers: A Journal of Women’s Studies